For those of you who celebrated Christmas, I hope you had a very Merry Christmas. And to everyone, I wish you all a Happy and Prosperous New Year.

2019 is already promising a lot of good news. The film of “Gabriel’s Inferno” will begin shooting on location by PassionFlix in Toronto and Italy in the fall of 2019. Stay tuned for more details or check out the link here.  PassionFlix is a streaming video service, similar to Netflix, that is available to subscribers worldwide.

I am writing the fourth book in The Gabriel Series now. Stay tuned for a formal announcement and a projected release date soon.

Several international translations of my books are forthcoming, including the Portuguese translation of “The Man in the Black Suit,” which will be published by Saida de Emergencia and released February 1st, 2019. A French translation of The Florentine Series is also forthcoming, as well as an Italian translation.

I am so grateful for your support. Thank you for reading. And thank you for how you make the world a better place through your kindness and compassion.

To celebrate the forthcoming “Gabriel’s Inferno” film on Passionflix, we’re beginning a Read A Long of the novel. We will begin this Friday, November 2nd with Chapter One.  So pick up your copy of “Gabriel’s Inferno” and bookmark the scenes you want to see on film.  Then come over to SR’s Fox Den Facebook group and post about your favourite moments. You will need to join the group first.

You don’t have to be on Facebook in order to participate – you can highlight your favourite scenes from Chapter One on social media by tagging @GabrielOnScreen and using #GabrielPassionFlix.  I want to be sure everyone knows that this isn’t just for English speaking readers – the Read A Long is for everyone. So read in your mother tongue and post about your favourite scenes in your own language.  Spread the word in  your reading communities. 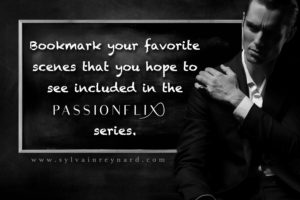 Thank you for reading along,

I have good news. The audiobook of “The Man in the Black Suit” is now available on Audible. The audiobook is also listed on Amazon. It will be released on January 30th.

I want to be sure to thank all of you for your incredible, vocal support of #TMITBS. Thank you for reading, blogging, reviewing, posting, and tweeting about it. Thank you for recommending it to your friends. I am so grateful for your support.

For those of you who’d like to read along with a book club, the #TMITBS podcast will be starting soon. You can find out more on their Twitter page.

Currently, I’m writing the fourth book in #TheGabrielSeries, a novella that will pick up where “Gabriel’s Redemption” left off. As I’m writing, I’m conscious of your encouragement and enthusiasm for this project. I write for you.

If you’re interested in joining the #GabrielsRedemption read a long and podcast, you can find out more about their start date, etc. on their Twitter page.

Thank you for listening,

The Man in the Black Suit (#TMITBS) has been released. Thanks to you, it is already climbing the Amazon bestseller list and receiving excellent reviews. You can order the ebook on Amazon here.

You can order the paperback here.  As more vendors become available, I’ll update the post with those links.

#TMITBS can be purchased in the iBooks store. You can order the novel for Nook here.

You can order the novel for KOBO here.

Both ebooks and paperbacks have a copy of my autograph in them, as a thank you to you, readers.

The audio CD can be ordered here.

I’m told the audiobook will also be on Audible and I’ll post those links when they’re live.

Happy Holidays and all the best for 2018 and beyond,

My new book, “The Man in the Black Suit” will be releasing on December 19, 2017.  This is a stand alone contemporary romance/suspense novel, set against the backdrop of Paris and beyond.  You can pre-order the ebook on Amazon.  You can also order the audiobook on Amazon, as well as Barnes and Noble. The paperback is now available and can be purchased here.   available on Amazon.com on December 19th.  The book will be available on Barnes and Noble for ebook and in print, and I’ll post those links as they become available.

Here is the synopsis of the novel:

“Brazilian Acacia Santos excels at her job as concierge at the prestigious Hotel Victoire in Paris. When her senior colleague is attacked and sent to the hospital, she is tasked with serving one of the hotel’s most mysterious and attractive guests.

They strike a tenuous accord until Acacia discovers a famous stolen painting in his suite. Compelled to report her discovery, she contacts a former boyfriend who works for the elite BRB, a unit of French law enforcement that deals with stolen art.

Nicholas is questioned by police and released when it is revealed the painting is a reproduction. Irked with her behavior, Acacia’s supervisor demotes her, threatening dismissal and the cancellation of her work permit.

Secrets and danger abound as Nicholas and Acacia try to solve the mystery of a piece of stolen art. But Acacia may prove to be the most dangerous mystery of all.”

Also, I want to invite you to join a new Facebook group “SR’s Fox Den,” which will be a place to interact with me and other readers from around the world.