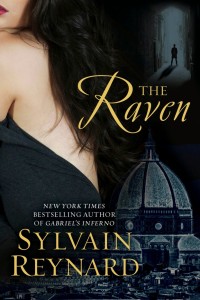 Raven Wood spends her days at Florence’s Uffizi gallery restoring Renaissance art. But an innocent walk home after an evening with friends changes her life forever. When she intervenes in the senseless beating of a homeless man, his attackers turn on her, dragging her into an alley. Raven is only semiconscious when their assault is interrupted by a cacophony of growls followed by her attackers’ screams. Mercifully, she blacks out, but not before catching a glimpse of a shadowy figure who whispers to her . . .

When Raven awakes, she is inexplicably changed. Upon returning to the Uffizi, no one recognizes her. More disturbingly, she discovers that she’s been absent an entire week. With no recollection of her disappearance, Raven learns that her absence coincides with one of the largest robberies in Uffizi history—the theft of a set of priceless Botticelli illustrations. When the police identify her as their prime suspect, Raven is desperate to clear her name. She seeks out one of Florence’s wealthiest and most elusive men in an attempt to uncover the truth. Their encounter leads Raven to a dark underworld whose inhabitants kill to keep their secrets . . .

A lone figure stood high atop Brunelleschi’s dome, under the shade of the gold globe and cross. His black clothing faded into the encroaching darkness, rendering him invisible to the people below.

Not that they would have seen him.

From his vantage point, they looked like ants. And ants they were to him, an irritating, if necessary, presence in his city.

The city of Florence had been his for almost seven hundred years. When he was in residence, he spent the moments before sunset in the same place, surveying his kingdom with Lucifer-like pride. This was the work of his hands, the fruit of his labor, and he wielded his power without mercy.

His considerable strength was magnified by his intellect and his patience. Centuries had passed before his eyes, yet he remained constant. Time was a luxury he owned in abundance, and he was never hasty in his pursuit of revenge. Over a hundred years had come and gone since he’d been robbed of some of his most prized possessions. He’d waited for them to resurface and they had. On this night, he’d restored the illustrations to his personal collection, the sophisticated security of the Uffizi Gallery causing him only the most trifling of inconveniences.

So it was that he stood in triumph against the darkening sky, like a Medici prince, looking out over Florence. He smelled rain on the warm air as he contemplated the fate of those responsible for acquiring his stolen illustrations. He’d intended to kill them two years previous, but had been thwarted by a tiresome assassination attempt. The war that ensued between the underworlds of Florence and Venice had kept him occupied since then. He’d won the war, successfully annexing Venice and all its territories. And his prey had finally returned to the city. Now was the time to have his revenge.

He had time enough to plan the killings and so he stood, enjoying his success, as a warm, persistent rain began to fall. The ants below scattered, scurrying for shelter. Soon the streets emptied of human beings.

He clutched the case under his arm more closely, realizing that his illustrations were in need of a dry space. In the blink of an eye, he traveled down the red tiles to a lower half dome before leaping to the ground and sprinting across the square. Soon he was climbing to the roof of the Arciconfraternita della Misericordia, an adjacent, aged building.

There was a time when he would have served the Arciconfraternita, joining in their mission of mercy, rather than treating them as a hurdle. But he hadn’t been merciful since 1274. In his new form, the concept never entered his consciousness.

Some hours later, he flew across the tiled roofs at great speed, dodging raindrops and heading toward the Ponte Vecchio. The smell of blood filled his nostrils. There was more than one vintage, but the scent that attracted his attention was young and unaccountably sweet. It resurrected in him memories forgotten, images of love and loss.

Other monsters moved in the darkness, from all parts of the city, racing toward the place where innocent blood cried out from the ground.

He changed direction and increased his speed, moving toward the Ponte Santa Trinita. His black form blurred against the night sky as he leapt from rooftop to rooftop.

As he ran, the question uppermost in his mind was: Who will reach her first?