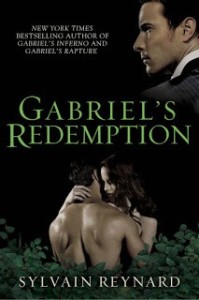 From the author of the New York Times bestsellers Gabriel’s Rapture and Gabriel’s Inferno comes the epic conclusion to the captivating romantic trilogy.

Professor Gabriel Emerson has left his position at the University of Toronto to embark on a new life with his beloved Julianne. Together, he’s confident that they can face any challenge. And he’s eager to become a father.

But Julianne’s graduate program threatens Gabriel’s plans, as the pressures of being a student become all consuming. When she is given the honor of presenting an academic lecture at Oxford, Gabriel is forced to confront Julianne about the subject of her presentation—research that conflicts with his own. And in Oxford, several individuals from their past appear, including an old nemesis intent on humiliating Julia and exposing one of Gabriel’s darkest secrets.

In an effort to confront his remaining demons, Gabriel begins a quest to discover more about his biological parents, beginning a chain of events that has startling repercussions for himself, Julianne, and his hope of having a family.

Professor Gabriel Emerson stood in the doorway of his study, hands in his pockets, gazing on his wife with no little heat. His tall, athletic form was striking, as were his rugged features and sapphire eyes.

He’d met her when she was seventeen (ten years his junior) and fallen in love with her. They’d been separated by time and circumstances, not least of which was his indulgent lifestyle.

Yet Heaven smiled on them. She became his graduate student in Toronto six years later and they’d rekindled their affection, marrying a year and a half after that. Almost six months into their marriage he loved her even more than before. He envied the very air she breathed.

He’d waited long enough for what he was about to do. It was possible she’d need to be seduced, but Gabriel prided himself in his expertise at seduction.

The strains of Bruce Cockburn’s song “Mango” floated in the air, casting his memory back to their trip to Belize before they were married. They’d made love outside in a variety of places, including the beach.

Julia sat at a desk, oblivious to the music and his scrutiny. She was typing on her laptop, surrounded by books, file folders, and two boxes of papers Gabriel had dutifully carried from the downstairs of what had been his parents’ house.

They’d been resident in Selinsgrove a week—a respite from their busy lives in Cambridge, Massachusetts. Gabriel was a professor at Boston University while Julia had just finished her first year of a PhD at Harvard, under the supervision of a brilliant scholar, formerly of Oxford. They’d fled Cambridge because their home in Harvard Square was in upheaval, as an addition to the house was under construction.

The Clark house in Selinsgrove had been renovated to accord with Gabriel’s exacting standards prior to their arrival. Much of the furniture left behind by Richard, Gabriel’s adoptive father, had been placed in storage.

Julia had chosen new furniture and curtains and persuaded Gabriel to help her paint the walls. Whereas his aesthetic ran to dark wood and rich, brown leather, Julia preferred the light colors of a seaside cottage, with whitewashed walls and furniture, accented with various shades of Santorini blue.

In the study, she’d hung reproductions of paintings that were displayed in their house in Harvard Square—Henry Holiday’s Dante Meets Beatrice at Ponte Santa Trinita, Botticelli’s Primavera, and Madonna and Child with Angels by Fra Filippo Lippi. Gabriel found himself staring at the latter painting intently.

It could be said that the paintings illustrated the stages of their relationship. The first figured their meeting and Gabriel’s increasing obsession. The second represented Cupid’s arrow, striking Julia when he no longer remembered her, and also their courtship and subsequent marriage. Finally, the painting of the Madonna represented what Gabriel hoped might be.

This was the third evening Julia had spent at her desk, writing her first public lecture, which she would deliver at Oxford next month. Four days ago, they’d made love on the bedroom floor, covered in paint, before the furniture had been delivered.

(Julia had decided that body painting with Gabriel was her new favorite sport.)

With memories of their physical connection in mind, and the music increasing its tempo, Gabriel’s patience had come to an end. They were newlyweds. He had no intention of allowing her to ignore him for another evening.

He prowled over to her, his footfalls silent. He moved her shoulder-length hair aside, exposing her neck. The slight stubble of his unshaved face rasped against her skin, intensifying his kisses.