Recently, I celebrated the one year anniversary of the Italian release of “The Roman” by Delrai Edizioni. Delrai published the entire series in Italian, and those outside Italy can order them from Amazon.it

Part 3, the final part of “Gabriel’s Rapture,” will debut on Passionflix.com on August 12th. “Gabriel’s Redemption” will begin filming on location in Oxford and Italy this fall.

I’m also proud to be celebrating the 10th Anniversary of Berkley/Penguin’s publication of “Gabriel’s Inferno” and “Gabriel’s Rapture” on July 31st, 2022. Stay tuned for some giveaways in celebration.

I’ve been hearing from readers around the world who would like to read my books in their languages. One way to bring this about is for readers to reach out to their favourite publisher and suggest they acquire the translation rights to my books.

I’m very grateful for your support. Thank you for reading,

I have good news for Francophone readers. A French translation of The Raven is forthcoming.

I should have more news about the translation soon.

I also wanted to mention that The Prince is on sale for $1.99 for a limited time. This novella is a bridge between Gabriel’s Redemption and The Raven and features Gabriel and Julianne, while introducing us to the Prince of Florence’s underworld.

Thank you for reading and Happy Canada’s 150th to all my Canadian Readers. I hope you have a great Canada Day tomorrow.

Happy Fourth of July to my American readers, in advance.

I’ve penned a new outtake, featuring William and Raven. The outtake was first written for the Trilogia Gabriel podcast, which you can listen to online here.   They’ve translated the outtake into Spanish and you can read their translation here. The Noites em Florença podcast posted a Portuguese translation, which you can read here. (You can also listen to their podcasts online)

The English edition of the outtake is below:

“William stood in front of Raven, one of his hands behind his back.

He bent forward to kiss her, his cool mouth gliding over hers.

“Good evening.” The gentle cadence of his English accent caressed her ear, followed by his lips.

“Good evening.” She put the book she’d been reading aside and looked up at him. “Are you hiding something?” She gestured to the hand that remained behind his back.

The edges of his lips turned up. His gray eyes twinkled. “Perhaps.”

“Is it for me?” She angled her body, trying to see his hand.

“Yes.” He touched her face, his brow furrowing in concentration. “You are so beautiful.”

She lowered her gaze. “William,” she murmured.

“I’m afraid I tried to find something comparable to your beauty, but you far outshine everything I’ve found.” He lifted her chin and smiled at her.

He tasted her lips once again and as he was doing so, helped her to stand. He embraced her with his arms, pressing himself against her and deepening his kiss.

His movements were unhurried, languorous, as he moved with her.

He unwrapped her hand from his neck and lifted it to his mouth, pressing a kiss to her palm. Then he placed something on top of her lifeline and closed her fingers around it.

“What is it?” She looked down at her closed hand.

“A gift.” His eyes grew alight.

She opened her fingers to find a ring nestled in the palm of her hand. The band was made of yellow gold and atop it was a large oval green stone.

He nodded. He took the ring and placed it next to her right eye. “I picked the brightest, greenest emerald I could find. And still, it pales next to the brilliance of your eyes.”

William’s thumb caressed her cheek until she opened her eyes. He lifted her right hand and slipped the ring on her fourth finger. “In your presence, my love, I find myself without words.”

Raven kissed the frown that had overtaken his mouth.

“Thank you for seeing me.” She pressed her lips to his once again.

If you want more of William and Raven’s story, you can pick up “The Raven.”  Thank you for reading,

I have good news. The Raven is now on sale for $1.99 across platforms, including Amazon.com, Barnes and Noble, iBooks, Chapters.ca (KOBO) and Amazon.ca.

If you’ve never picked up The Raven, now is a good time to do so. Or recommend it to a friend. The sale price won’t last forever.

The Florentine Series is now complete and I’m working on my next book The Man in the Black Suit, which should release in December 2017.

Word of mouth is so important for authors. I’m grateful for your support.  All the best and thanks for reading,

The response to “The Prince” and “The Raven” has been overwhelming. Thank you.

I really appreciate your kind words about the books. I’m pleased to report I’m finishing the sequel to “The Raven” now and should know its release date soon.

Recently, a reader visited Florence and was kind enough to share some photographs with me. She has given me permission to share them with you, too, since they relate to my new Florentine Series.

When I was writing “The Raven,” I spent time in Florence researching the novel. I walked through the neighbourhoods and the alleys. I spent time looking up at the Duomo. I stood by the Arno River and watched it flow.

Here are two pictures of the alley Raven found herself in that fateful night: 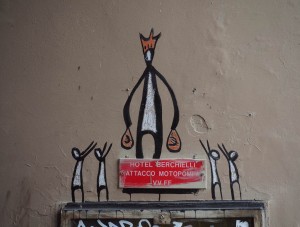 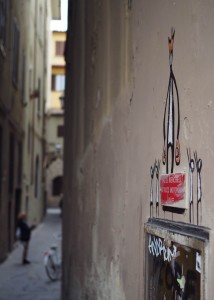 I should mention that the graffiti is accidental to my choice of alley, but it’s certainly interesting.

I have a few more photos I’ll be sharing in the next couple of weeks.

I wanted to mention that Perling and Elizabeth, two readers, have started a “Gabriel’s Inferno” podcast. They are broadcasting live on Sunday evenings and are proceeding chapter by chapter. On Sunday, April 12th, they’ll be discussing Chapter 5 at 7PM ET. They welcome readers around the world to join them, either by posting on the chat section of their page, or by sending in questions.

You can find their podcast here and listen to previous episodes.  Feel free to share the link with others. They’re hosting a giveaway of two autographed copes of “The Raven” and five signed bookmarks. (Autographed by yours truly; the giveaway is open internationally)

All the best and thank you for reading,