“Gabriel’s Rapture” released in May. Over the summer, both of my novels were picked up by Berkley press, a division of Penguin. The audiobooks were released in the fall and John Michael Morgan, the narrator, brought the novels to life.

I’ve entered into an agreement with Berkley to write three books.  The first book is the third novel in the Gabriel series. I’m writing it now and should have a release date for it soon.  The second and third books for Berkley are on subjects to be announced.  I’m looking forward to writing them and to sharing details about them with you.

Thank you for your support. You are the reason why 2012 has been such a great year. 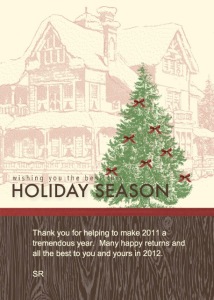 In addition to wishing you the best for Hanukkah, Christmas and New Year’s, I want to invite you and your friends and family to enter one of the current giveaways. There are copies of “Gabriel’s Inferno” to be won, along with coffee mugs and book marks.
The first giveway is hosted by the Bakin’ Goddesses and you can find it here.
The second giveaway is hosted by JJiReads and you can find it here.
Other contests will be forthcoming.
With thanks for your continued support,
SR
www.sylvainreynard.com
PS. Many thanks to Miss Mingo for designing the lovely holiday card above.