I’ve been sitting on some really exciting news that I finally will get to share with all of you. Please join me . . .

All my very best, 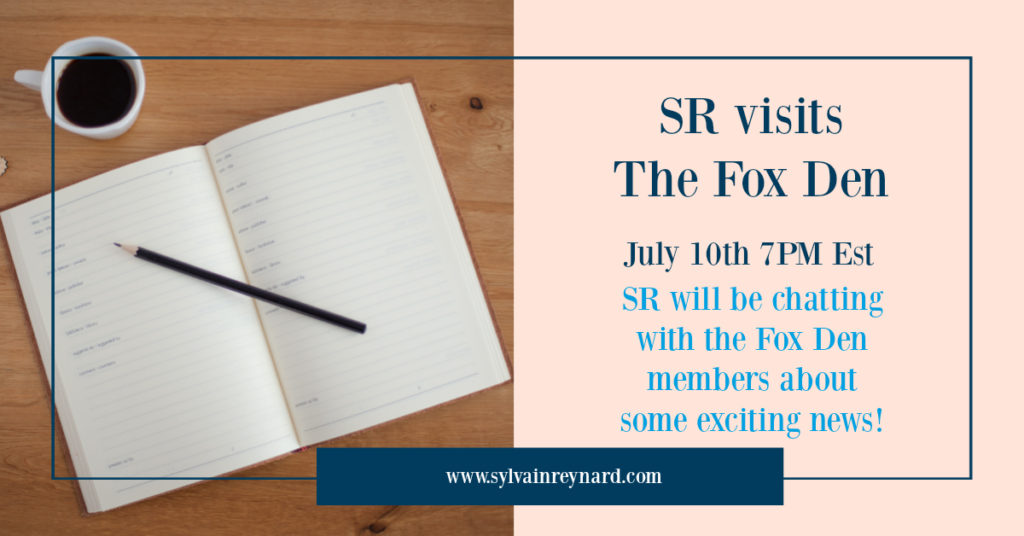 I will be chatting in my reader’s group SR’s Fox Den on July 10th at 7PM Eastern. We’ll be discussing a major announcement that will have just been released 🙂

I hope that you’ll all join us!

I’m happy to announce that “The Man in the Black Suit,” my latest novel, is on sale for $1.99 US (ebook) for a limited time across platforms. (See below) This book is a contemporary romance standalone novel that will transport you to Paris and beyond. So if you haven’t read it, or if you have a friend who hasn’t read it yet, now is a good time.  International vendors usually match the US price, taking into account the various exchange rates.

Also, as I’ve been saying for the past year – good news is coming. A major announcement is forthcoming here and on Facebook and other social media. So please subscribe to this site by entering your email address and also, please follow my author page on Facebook. Then you’ll be sure to hear the news as soon as it is posted.

All the best and thanks for reading,

As promised, please find below a NSFW Valentine’s Day outtake from “The Man in the Black Suit,” featuring Nicholas and Acacia.

I wish you a very happy Valentine’s Day. In previous years, I posted other outtakes featuring couples from The Gabriel Series as well as The Florentine Series. If you use the search function on my website, you’ll find those outtakes.

‘Nicholas rolled over, half asleep. Instinctively, he reached for Acacia.

He blinked against the darkness, lifting up on an elbow to survey the silent studio.

Acacia was standing in a pool of grey light that shone through the kitchen window. She was wrapped in a blanket, her feet and the lower part of her shapely legs exposed.

Nicholas pushed the covers aside and slid across the bed, wincing as his bare feet came in contact with the cold floor.

“Are you all right?” He crossed the room quickly, not just because he was naked. It had been a long time since Acacia had slept fitfully. He was concerned about what had driven her from his arms.

Acacia turned. Her mouth widened into a smile and she opened her arms.

Nicholas stepped into her embrace and slid his hands over her curvy backside. She wrapped her arms and the blanket around him.

“Look outside.” She inclined her head toward the window.

Nicholas turned and saw snowflakes floating in the air. He followed their trajectory, momentarily mesmerized as they fell to the courtyard below.

Thick snow blanketed the ground. The accumulation was unusual for Paris. Acacia’s courtyard had been transformed into a secret winter kingdom.

“It’s so beautiful.” Her hand slid upward to his chest to rest over his heart. “Is there enough to build a snow man? Or have a snowball fight?”

“If it doesn’t melt before morning.” Nicholas kissed the top of her head. “It’s the middle of the night. Come back to bed.”

“But the snow,” she protested. “You forget – snow is foreign to me.”

“I haven’t forgotten.” He lifted her chin, his dark eyes searching hers.

At six-foot-three, Nicholas was very tall. Acacia was six inches shorter and always looking up at him.

He caressed her cheek and bent to touch his lips to hers. “Give me a minute.”

He moved from under the blanket and walked over to her dresser. He opened the drawer she’d gifted him some time ago.

Acacia followed. “What are you doing?”

He sat on the edge of the bed, holding underwear and a pair of socks. “Getting dressed.”

He smiled. “I can’t help you build a snowman like this.” He jerked his chin toward his bare chest. His physique was lean and well defined.

Acacia followed his gaze, blinking at his chest. “It’s the middle of the night.”

“Mon amour, it might melt before morning. I don’t want you to miss your chance.”

Acacia pulled the blanket more tightly around herself, still staring.

Nicholas gave her a puzzled look. “You don’t want to go?”

She stepped in between his knees and looked down at him. “You’d go outside with me? Now?”

Acacia looked surprised and pleased. She gave him a slow, sweet smile that nearly broke his heart.

She dropped the blanket to stand naked before him. She touched his face tenderly and pressed her mouth to his.

“What about the snow?” he whispered.

“Later. What I want at this moment can’t wait.” She kissed him again, her tongue teasing his lower lip.

Nicholas made a noise and deepened the kiss.

Her mouth was warm and inviting. Despite the coolness of the air, their naked bodies transmitted heat as they came into contact.

His large hands slid to her backside. He eyed her breasts. “You’re cold.”

“Not for long.” She straddled him, placing her knees on the mattress on either side of his hips.

His hands smoothed up to her waist in order to steady her.

Nicholas kissed her collarbone and the tops of her breasts. He cupped her with both hands, his thumbs taunting her nipples. Then he took one of them into his mouth.

Acacia looped her arms around his neck and shifted forward. She kissed the skin below his ear and nipped the edge of his earlobe.

In response, he drew her nipple deeper into his mouth.

She rolled her hips and pressed his head to her breast.

His hand slid between her legs, gently exploring. He murmured his approval against her nipple.

She positioned him under her and slowly sank down, taking him into her body inch by inch.

Nicholas groaned as she adjusted her position, sliding closer so her breasts brushed against his chest. He clasped her hips and bowed forward, capturing her other nipple between his lips.

Acacia began to move up and down, her rhythm even and determined. He assisted her with his hands, pushing and pulling.

She rolled her hips again and gasped as he drew on her breast.

“Kiss me,” he whispered.

She fanned a hand to the back of his neck and kissed him firmly, their tongues playing with one another. Up and down. Up and down. Her pace began to increase.

Nicholas thrust up, a rough exhalation leaving his chest.

“I’m close,” she panted, clutching his shoulders for balance.

“Fly,” he rasped, squeezing her hips.

She arched backward, her eyes closed. Nicholas grunted and lifted his hips, speeding his movements.

Then, all at once, pleasure overtook her.

Acacia repeated her movement, even as Nicholas continued thrusting. He quickened his pace until he shuddered beneath her.

When he finally stilled, he mumbled an oath. His grasp on her hips eased and he hugged her against his chest.

A short time later, Nicholas held her hand as they descended the staircase to the ground floor. Gerald, one of his bodyguards, escorted the couple to the rear entrance of the building.

“When is Rick on duty?” Acacia asked about her favorite bodyguard.

“Not until the fifteenth.” Nicholas smirked. “He’s spending Valentine’s Day with Diana.”

“Apparently, she’s teaching him Spanish.” Nicholas placed his hand at Acacia’s lower back and followed her outside.

She stopped a few steps into the courtyard, gazing up at the falling snow. The sky was like lead and the Latin Quarter was very quiet. Acacia fancied she could hear the snowflakes as they moved.

She closed her eyes and inhaled. The air was frigid and sharp and reminded her of peppermint.

She felt something cold and wet on top of her head.

She opened her eyes to find Nicholas standing over her, sifting a handful of snow over her curls.

“Come on, Brazil.” He grinned. “You owe me a snowball fight.”

Acacia bent to the ground and gathered some snow. She threw it at his face.

Nicholas dodged and grabbed her by the waist, lifting her.

She shrieked and began to laugh as he spun her around. She clung to his shoulders for balance.

Nicholas joined her laughter. And when he finally stopped spinning, he brought his nose within an inch of hers.

“Thank you, xodó.” She pulled his head closer and kissed him.’

I have good news. The audiobook of “The Man in the Black Suit” is now available on Audible. The audiobook is also listed on Amazon. It will be released on January 30th.

I want to be sure to thank all of you for your incredible, vocal support of #TMITBS. Thank you for reading, blogging, reviewing, posting, and tweeting about it. Thank you for recommending it to your friends. I am so grateful for your support.

For those of you who’d like to read along with a book club, the #TMITBS podcast will be starting soon. You can find out more on their Twitter page.

Currently, I’m writing the fourth book in #TheGabrielSeries, a novella that will pick up where “Gabriel’s Redemption” left off. As I’m writing, I’m conscious of your encouragement and enthusiasm for this project. I write for you.

If you’re interested in joining the #GabrielsRedemption read a long and podcast, you can find out more about their start date, etc. on their Twitter page.

Thank you for listening,